The Avalon Preservation Trust (APT), now the Avalon Preservation Association (APA), was established in 1967 as a result of local concern about the indifference to the natural environment displayed by Warringah Council and exploitative developers.  APA has been working for members and Avalon residents for more than 50 years,

Warringah Shire Council’s ‘Amended Warringah Scheme’ to allow the zoning of 90 acres (36.5 hectares) for flats in Avalon in 1967 brought an overwhelming response. Although Avalon Progress and Ratepayers’ Association fired the first shots, it was the impetus that stirred a new residents’ group into formation to engage in positive action. According to ‘The Avalon News’ vol. 15 no.12, the Avalon Preservation Trust (APT) held its inaugural general meeting in July 1967. The new Trust wasted no time and became immediately active, opposing this new zoning. A team of members set-up in the shopping centre each Saturday to assist locals wishing to lodge objections. Within a short time, the State Planning Authority, the Warringah Shire Administrator, the Minister for Local Government and the Member for Collaroy had been swamped with letters of protest and objections.

For most of the late 1960s, commercial interests had been removing tons of sand from the Avalon Beach northern dune, which included a huge spur buttressing the dune. Repeated requests from the Trust for a court injunction from Warringah Shire Council to stop this destructive activity were constantly ignored. The Trust sent a telegram to the Minister for Local Government requesting cessation of the work and was advised that the State Planning were seeking to acquire the land for recreation purposes. The Trust was also informed that the council had the situation in hand. In truth neither had the situation in hand at all, so some members of the Trust took it upon themselves to stage a sit-in and create a vehicular barricade to stop the trucks from accessing the sand-loading equipment. Apparently this had the desired effect and a further injunction was successful.

The Trust was ably represented on the Northern Beaches and Bushlands Committee with 2 delegates. The committee assisted residents from Duffy’s Forest and Terrey Hills by supporting their campaign against the push for a third airport site in their area. It took almost 5 years of continual effort until the idea was finally put to rest.

In 1971 a proposal for a hovercraft operating out of Careel Bay was mooted. The thought of such an intrusion taking over the bay revolted many residents and boat owners. The Trust encouraged residents and recreational users of the bay to write to the Minister for Transport expressing their dissatisfaction at this threat. As a result it never became a reality.

In July 1972 the NSW Department of Lands proposed to Warringah Council reclamation of most of the Bay’s 60 intertidal acres (24 hectares) for playing fields and other recreation, including a marina. ‘The Australian Women’s Weekly’ saw fit to publish 3 pages, including coloured photographs, of the Careel Bay mangroves, reporting that ‘the Avalon Preservation Trust was the first to leap into battle, it wants the mangroves left alone. And it has enlisted some impressive supporters. The Australian Littoral Society insisted that the mangroves are a non-renewable natural wealth of the highest order and along with the Trust, wants Careel Bay to be declared a marine nature reserve’. The Trust became a major player on the Careel Bay Advisory Committee and a public meeting in 1975 attracted 600 people.

In 1962 the Wild Life Society sought to establish a management committee for the Angophora Reserve, under the control of the Warringah Shire Council.  Voluntary workers cleared lantana, bridged small watercourses and burnt rubbish. Waratahs were planted and the small parking area at the Palmgrove Road entrance was constructed. Unfortunately this inaugural committee didn’t last, but 968 saw a re-activated committee get underway with the assistance of Pittwater Rotary and Bert Payne (from Payne’s Timber in Newport).  Members of the Trust became very active, especially planting lots of Grey Gums, the chosen food tree for the koala population.

The care of the Reserve these days is managed by an enthusiastic group of volunteers, including members of the Trust. They have been working every 3rd Sunday of the month since February 2010 when the group was formed.

In 1979 the Trust was very critical of some of the work proposed by the Metropolitan Water and Sewerage Board, especially in regard to the path taken by the sewer line through Angophora Reserve. The Trust Committee did not agree that ‘environmental destruction was the price we would have to pay for sewerage’. Attention would also be given to the works associated with the construction of the several pumping stations that were being constructed in the area.

In 1985 the Pittwater Palms retirement village was mooted and on behalf of the Trust, Connie Adams approached the Heritage Council to ‘put an interim conservation order on the site to preserve existing trees’. Leightons asked for Council’s approval of change of consent.

The Ombudsman replied that he could ‘under his act, do nothing to help us’. The Trust then asked the Councillor Frank Beckman to have council defer consideration of plans until after the Heritage Council had approved it.  This development was the ‘straw which broke the koala’s backs’. It severed the corridor necessary for their transit from their food trees of choice (grey gums) in Angophora Reserve to those in Stapleton Park.

APT Chairman Garvon Kable attended several meetings with the Chief Engineer of the Department of Main Roads (DMR) and local member Max Smith MP concerning the Bilgola Bends. The DMR thought widening the bends in association with the new ‘Bendy’ buses would be an appropriate move, until Warringah Council refused their application to use 60 square metres of Hewitt Park to widen the western (and sharpest) corner. The spoil created by premature excavation in preparation for the widening of the bends was then deposited on the southern side of the valley. This eyesore was hurriedly planted out using native shrubs and trees after the National Trust announced (via Garvon Kable) in August 1985, that ‘the DMR have abandoned their plans to make a four-lane highway across the valley’.

It was agreed at the AGM in March 1989 that a newsletter would be an effective way to keep members informed of the activities and issues involving the Trust. June 1989 saw the first Avalon Preservation Trust newsletter published. The first item recognised the marvellous effort of the Trust’s Vice -Chairman, Connie Adams, in having the Angophora Reserve included in the National Estate Register. The Heritage Commission considered that the area has a national significance in our heritage providing ‘an important refuge and protected movement corridor for fauna, particularly Sydney’s diminishing koala population’. The area’s value in terms of flora such as the Spotted Gum communities (which used to be widespread on the Peninsula) was noted. The Aboriginal rock-shelter and its social and spiritual significance to the Aboriginal community in pre-European times was also noted. The article finished with ‘… residents of the local area are indebted to Connie for her generosity with her time, the thoroughness of her research and her indefatigability when pursuing an issue’.  The newsletter also announced that ‘Koalas are still on the move and we have koala food trees for sale for members and non-members’.

Besides holding the position of Vice-Chairman of the Trust, Connie was also Chair of the Management Committee of the Angophora Reserve. A plaque is mounted on a sandstone plinth at the Palmgrove Road entrance to the Reserve commemorating her devotion to the preservation of the Reserve.

Richard Stutchbury’s name first appears in the minutes of the meeting held at the Adam’s house in Central Road on 31 October 1985. In fact he is the only member present then who is now still alive. Chairman Garvon Kable, Connie Adams, Norbert de Rome, Barbara Nielsen, Doug Blaydon and Ray Patterson have all passed on.

In 1986 Richard was also appointed an Honorary Ranger for the Avalon area, and in 1988 became a Co-opted Advisor as a member of the Management Committee.

In July 2017 the APT clocked up a remarkable 50 years as watchdog over our local environment.

[This short history is an edited version of a longer document supplied by Geoff Searl of the Avalon Beach Historical Society. Several of the historical photographs throughout this website were also supplied by the Society. Many thanks to Geoff and ABHS.] 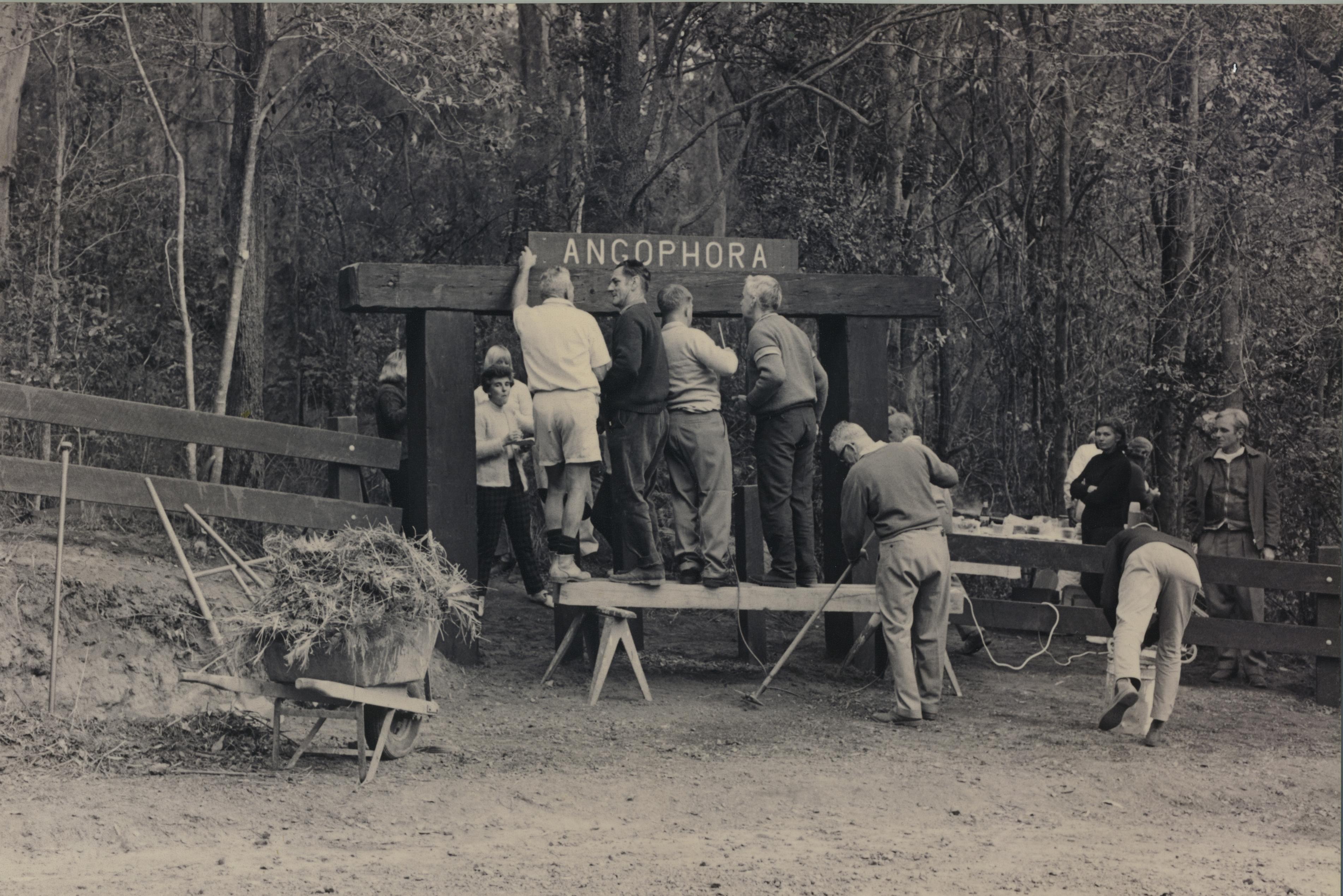 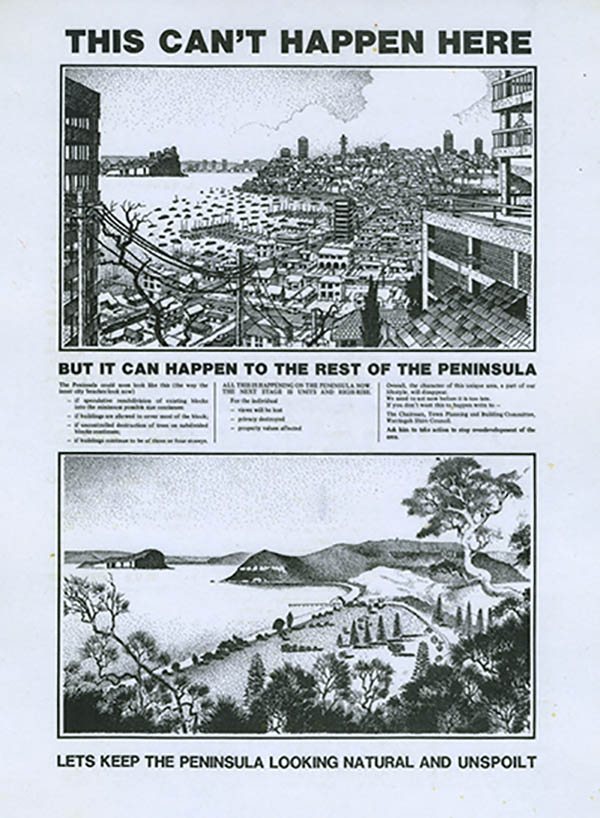 The Manly Daily advert supported by the Avalon Preservation Trust, The Palm Beach Association and the Whale Beach Preservation Society’.

The advert was paid for ‘by a number of residents of the Peninsula because they were deeply concerned about the change that is occurring to the character of the area’.

It was drawn by Tony Edwards (aka Captain Goodvibes from early Tracks magazine) who at the time was living in ‘Windy Ridge’ up on Sunrise Hill and he drew this from his balcony. Circa 1970s.